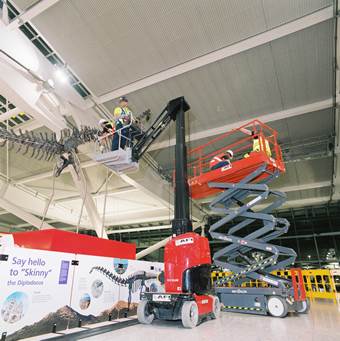 AFI’s major project team has been busy this spring with the successful installation of a 13 metre 155 million-year-old dinosaur skeleton, which towered over the check-in at Heathrow Terminal 5.

It was assembled over two nights and was on show at the airport for two months, until June, when it was dismantled and returned to France to be sold by Auction. The Auction house Aguttes expect the enormous fossil to fetch £2 million. ‘Skinny’ as he is named, is a cousin of the diplodocus and is still to be given a scientific name. He’s 13 metres long, 8 metres high (with his base) and he has around 90% of his original bones.

Incredible time-lapse footage taken of the skeleton’s installation, shows the AFI MEWPs coming in and out to enable the specialist crews to painstakingly assemble the skeleton bone by bone over two nights. AFI’s major projects team stepped up with their knowledge of the way Heathrow operates after taking an enquiry from Edge Retail, a design consultancy that specialises in the retail environment. AFI’s major projects team are well experienced in the specific policies, procedures and requirements at Heathrow, so once contact was made with the Project Manager from Edge Retail, the AFI team were immediately on hand to scope out the best access solution for this time sensitive, dramatic installation. Once the team understood the specifics of the requirement and the exact location within Terminal 5, they were able to recommend the right machines for the job. Originally a spider boom was on order for the installation project, but because of the limitations and restrictions in place across the vast airport site, diesel machines cannot be used within the terminal. In total, AFI supplied seven machines, a combination of electric scissor, mast and boom lifts.

Heathrow closes its doors to the public at 10pm to allow essential works to be carried out before it re-opens at 4am. The last flight normally leaves about 10.30pm. The AFI team had to deliver the machines into a holding area on the first day at 4pm and then at 9.30pm the machines were transported to the laydown area on departures to wait for the go-ahead to be able to unload.

Because the machines had to be taken through one end of the terminal to the other, they had to be fully charged and in best condition. AFI had an engineer on standby throughout the installation as a precautionary measure, because if a machine had broken down within the terminal building, it would need retrieving immediately.

The process to build, move and dismantle the skeleton is extremely complex. Edge Retail had organised a specialist team from France to manage the build. Paleomoove Laboratory, a French company which specialises in the restoration of fossils decided to use stainless steel as the supporting structure for the dinosaur skeleton for its durability and aesthetics.

The original detailed planning for the Heathrow project specified the use of a spider lift. The technical team at AFI knew that this would be a costly option on the Heathrow site so, after a site visit, a more specific route for the machines to be taken in was established, and AFI were able to make significant savings for the customer by suggesting a Niftylift HR12 boom lift instead. After meeting the Edge Retail Project Manager onsite and taking several measurements, the Niftylift HR12 boom lift was the first machine to be recommended by the experienced AFI major project team. With its compact dimensions and class-leading working envelope, it is versatile and reliable. A telescopic upper boom provides increased accuracy when positioning the platform, and a 6.10 metre outreach makes this self-propelled boom lift perfect for reaching up and over all kinds of obstacles – in this case so that the specialist team could place the fossils at the top of the creature’s head and the tip of its tail with ease. The Niftylift HR12 boom lift is 1.50 metres wide and the width it had to go through was 1.55 metres, so it was a tight gap to get through! In addition, the diesel tank was drained, and the engine was isolated so it couldn’t be started within the terminal because of the sophisticated heat and smoke sensors inside. The next machines supplied by AFI were three Haulotte Star 10 electric vertical mast lifts. With a reach height of 10 metres and a horizontal reach of 3.10 metres, these machines are just less than a metre wide, making them easy to get in and out of the terminal. These electric vertical lifts provide agility in confined working areas and a tight turning radius via a 3 metre outreach vertical jib.

After a successful first night, the machines were removed from the airport at 4am when the airport became live again. Our in-house delivery driver was waiting to collect the machines and take them back to the depot for the engineers to put them on charge. AFI’s London West depot is conveniently located just four miles from Heathrow. At 9pm the machines were loaded up to go back to Heathrow Terminal 5 and wait in the laydown area again.

The installation work was split over two nights, AFI provided four machines on the first evening, and seven on the second evening, where the bulk of the fossils were put in place, the dinosaur installation was completed, and the final tweaks were made. Three of Skyjack’s SJ4626 electric scissor lifts were recommended by the AFI team to finish the project. The SJ4626 is a compact and efficient option for low level, safe working at height indoors. Each machine has a working height of almost 10 metres, a single deck, narrow isle and non-marking tyres. This was ideal to get in and out of the terminal and provide access to add the finishing touches to the fossil structure.

On day two, we had our photographer on site. Work started again at 10pm and finished at 4am. We weren’t the only camera crew on site for this historic project, the installation was filmed and appeared on the 5th series of Britain’s Busiest Airport which started in May on ITV. Our in-house delivery truck was filmed transporting the machines into the airport, coming up to the departures, and loading and unloading the MEWPs.

What next for ‘Skinny’?

In June AFI went back to Heathrow to undertake the project in reverse! We provided the access equipment for the Paleomoove team to dismantle and remove the dinosaur skeleton for it to be returned to France. It will then be auctioned by French auction house Aguttes, where they expect it to fetch up to £2 million.