Brian Parker, our Business Development Manager, Technical Support, is the sub group Chairman of IPAF's 'Spread the Load' working group, which is working under the direction of the IPAF UKCC (UK Country Council).

He has now been tasked with updating the IPAF guidance to bring clarity and standardisation to the industry.

His work will also involve ensuring that the guidance also considers wheeled and tracked MEWPs. 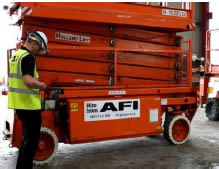 The term ‘wander leading’ MEWPs refers to the operator stood on the ground but using the upper platform control to drive the MEWP while walking alongside the machine. This is also sometimes referred to as ‘dog walking’ but is essentially remote controlling the MEWP. The decision to wander lead any MEWP should not be taken lightly. Why? You will nearly always be safer when stood in the platform driving the MEWP as you have protection in the form of guardrails around you. Your visibility is undoubtedly better and you are certainly less at risk from being crushed or trapped between the MEWP and any object or indeed running over yourself with your own MEWP.

Now you may believe that this rarely happens and when it does, it must have been the result of some poor decision making at the time by the operator, but this generally isn’t the case. We are seeing an increasing amount of incidents from this method of driving the MEWP and statistics from the IPAF accident reporting database show that this happens more than we may have previously realised.

There are of course times when we do need to wander lead the machine, for example driving the machine through a narrow or low doorway, or negotiating a low overhead obstruction, in cases like these it would not be safe to remain on the MEWP platform with the guardrail in the lowered position. If the decision has been made to drive a MEWP from outside the platform, then the following points MUST be considered;

*Hydraulic and electrical ramping is built into the MEWP design by the MEWP manufacturer and may mean that the MEWP may not stop immediately when the controller is released.