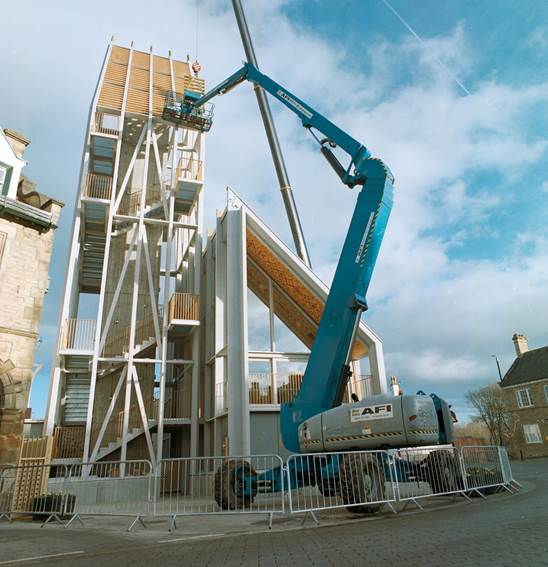 Hailed as a landmark, Auckland Tower, opened in Bishop Auckland in October 2018. The 95ft (29m) structure is part of a wider project which is set to rejuvenate the town by making it a top tourist destination.  The viewing platform offers panoramic views over the town and the tower displays information about Auckland Castle, which is undergoing major redevelopment.

A Fab Limited were appointed as the metalwork contractor on this project by Vest Construction. They hired a Genie Z135 Articulated Boom to install the decorative panels and lighting protection on a site that had a relatively small footprint.   The Genie Z135 is part of AFI’s Super-Set fleet, it has a working reach height of 43.15m with a potential outreach of 21.26m.  This machine provided the necessary range of movement, reach and versatility required to enable operatives to erect the panels safely and efficiently.

“We requested a site survey from AFI who recommended the Z135 boom due to the confined footprint, proximity to the finished building and road. The machine was delivered on time, worked amazingly, and was stable at height enabling us to complete the install within two days, despite allowing for four days.”

Vest Construction, a privately-owned Building and Civil Engineering company which targets construction projects in the North East region, are the main contractor for the development.

AFI has made considerable investments in its Super-Set range, which now features over 130 machines with working heights from 21.40m to 58.56m.  AFI’s Super-Set large machine hire range now has its own dedicated transport delivery fleet and includes the impressive Holland Lift Megastar Diesel Scissor Lift which has a reach height of 33.70m and the world’s largest boom, the JLG 1850SJS which has an eye watering reach height of 58.56m!