AFI’s decision to make mental health a key theme of an innovation day event it held for construction industry delegates has resulted in a number of companies implementing their own initiatives to combat the problem. 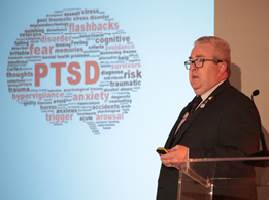 At the AFI Driving Innovation Day, Martin Coyd, Head of Health & Safety at the Mace Group, revealed that 1 in 4 people will have a mental health problem and 454 people in the construction industry committed suicide last year. He also pointed out that 81% of all suicides are male. In another presentation, David Bickel, who served in the Army for 23 years, outlined what it is like to suffer from Post Traumatic Stress Disorder (PTSD).

Following the event, Kelly Formwork UK Ltd has become one of the latest companies to implement measures to address mental health issues.

Matt Selby, Group Procurement Director, said: “We had been aware that there were issues in the industry that needed to be acted on but the presentations at AFI’s Driving Innovation Day really opened our eyes to the scale of the problem. We had already appointed a Safety Walker at the Waterloo International Terminal project to work alongside our Health & Safety Director and ensure the welfare of our people working there. Following the AFI event, he is now more aware of addressing mental health issues with the people on site.

“We are also in the process of joining Mates In Mind, which has been established by the Health in Construction Leadership Group with the support of the British Safety Council. Through this organisation we will be able to provide our employees with support and guidance on mental health, mental illness and mental wellbeing.”

“We are not aware of any mental health issues within our group, but that doesn’t necessarily mean that no-one is suffering because one of the key points to come out of  the AFI event was that people do not come forward to seek help,” he added.

“The AFI event was excellent in making people aware of mental health issues in the construction industry and we at Kelly Formwork will be playing our part by also sharing the information we have been given with others in the industry.”